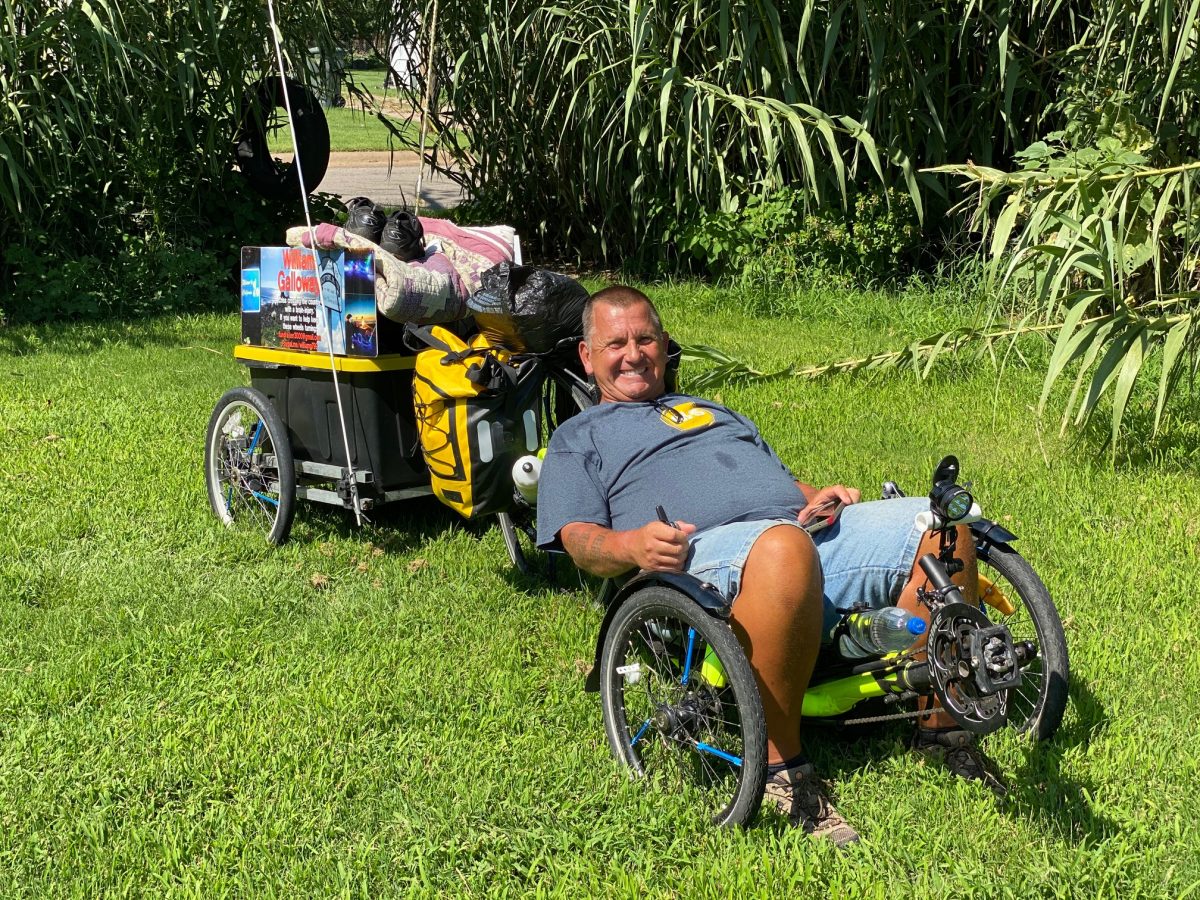 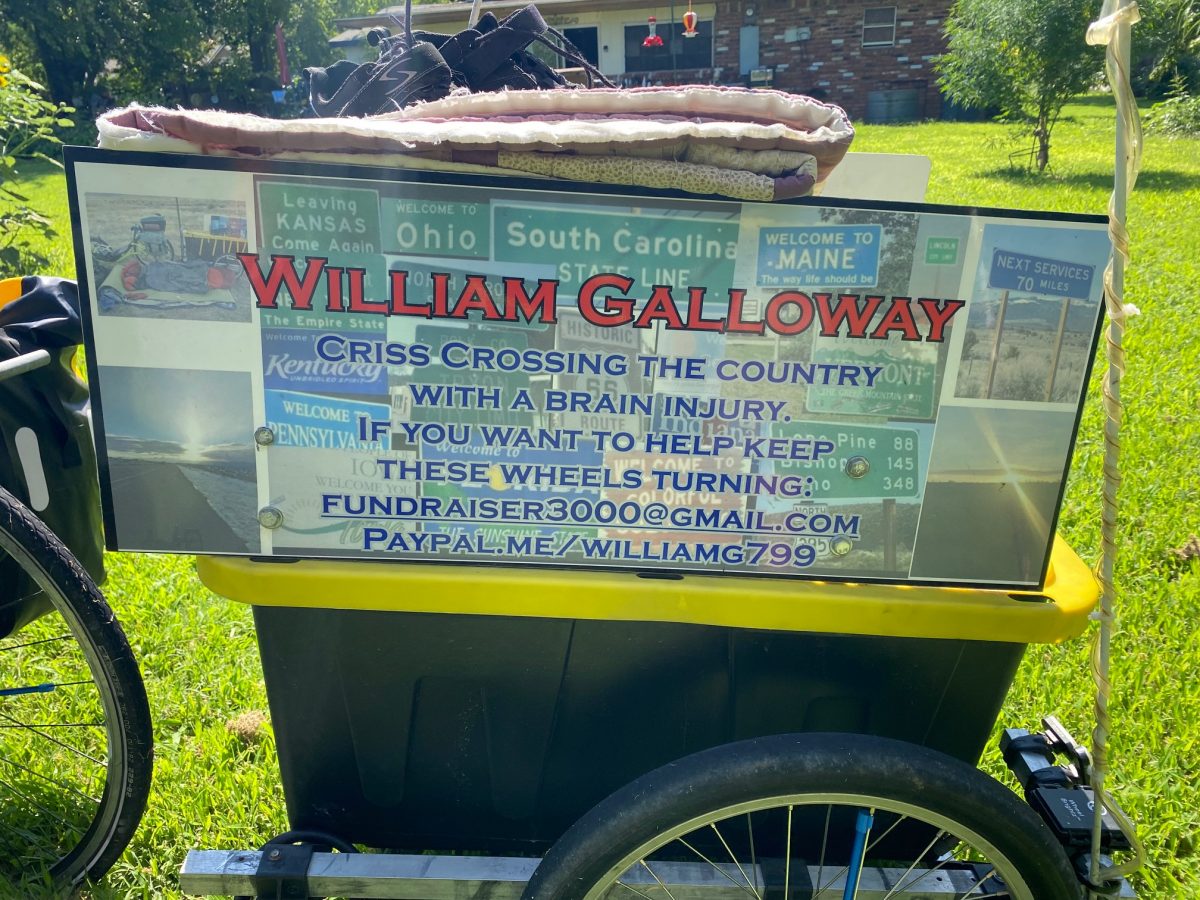 Last June, the Fairview Republican published a story about world traveller William Galloway and his life saving mission to help those suffering from brain injuries.

Just last week, the Fairview Republican had the opportunity to catch up with Mr. Galloway as his travels lead him back to Fairview.

However, a lot has changed for the free loving spirit Galloway since last year, as he is now in the middle of his sixth trip complete cross country trip.

After leaving Fairview last June, Galloway embarked for the state of Florida, where he had high hopes of possibly receiving a new recumbent bike.

His journey lead him to all the states with exclusion of: Arkansas, Louisiana, Mississippi and Montana in the continental United States, along with Alaska and Hawaii.

His hopes did in fact come to fruition as he now sports a bright yellow Catrike recumbent bike that is bright enough to be seen for miles.

After hearing of his journey and mission, the company stepped up to provide the bike at no cost.

Although the bike was a welcomed blessing, something even more incredible happened.

Along the trip other newspapers and television stations picked up on Galloway’s story and before long donors started pitching in to help. Along his journey from North Carolina to Florida, Galloway had hotel rooms paid for on his behalf. It was a welcome relief for Galloway.

It wasn’t all smooth going for Galloway however; during his journey to Florida he was sidelined for five weeks due to having screws inserted in his back.

Also Galloway wasn’t immune to the impacts of the COVID-19 pandemic, as officials in Connecticut pushed hard to have him detained due to him travelling from across state lines.

Weather has also posed its own challenges as well, as he has dealt with tornado warnings near Joplin to blizzards in several locations.

None of the storms however, have came close to derailing his mission and passion.

Though now, maybe more than ever, Galloway says he could finally see ending his cross country travel and just settling down but it would have to be on his own terms.

The years on the road and the back surgery have taken a toll on the 56-year-old.

His ideal home situation would be some type of home that needs work that would allow Galloway to make the repairs in exchange for a place to stay. He would also like to house others in the same situation as him.

He said he does long for a bed to sleep in once again instead of the mat he has grown accustomed to on his journey.

Since his back surgery, he said he now occasionally has to deal with sciatic nerve pain.

After his arrival in Fairview a couple of weeks ago, Galloway was able to find work performing yard work and he loved being able to perform the tasks.

Although he has family back home in New Jersey, he said he has no real intentions to return saying he doesn’t really have contact them as they don’t understand his way life or his mission.

Galloway did receive a nice Christmas surprise on his journey last year while staying at a hotel. He found out the employee of the hotel been homeless at one point and she arranged for a room for him for five days.

He was able to celebrate Christmas with his new found friends and he said it was an awesome experience.

The couple tried to arrange a shelter for Galloway to stay in, but he continued on his journey.

After other news sources began reporting on his mission Galloway said he was featured on a radio program in Utah called the Laid Back Bike report. His interview paid off well as he was gifted all the Dunkin Donuts he wanted.

When asked about the grueling terrain he faces, he did state he has looked into equipping his bike with a motor setup but he added the cost to outfit the bike is somewhere around $2,000 by the time he purchases the wheel and batteries required for the setup.

Although not the original goal of his journey, Galloway said he has been able to reach out to people about the dangers of drunk driving as he has shared the story of his accident and how his life was nearly ended due to a drunk driver.

Galloway said his major needs right now are money for food and to maintain his cellphone, 20-inch high pressure tires for his bike, XXL T-shirts with pockets and a winter sleeping bag.

For people wanting to help Galloway as he continues his journey, he accepts donations at www.paypal.me/williamg799 and he can be reached at fundraiser3000@gmail.com. 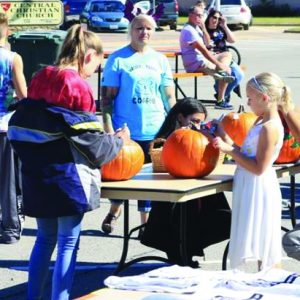 Fairview’s FestiFall will continue but at new location 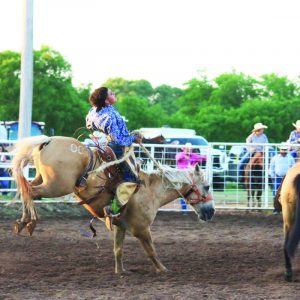 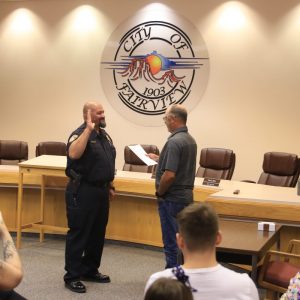 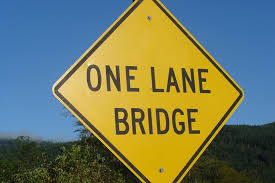